A cliff-top view of an exotic lagoon at sunset, the sea scattered with a variety of watercraft, is the backdrop to the five reels in The Explorers. The casino slot bears the Euro Games Technology hallmark of brilliantly realistic 3D graphics and animations, with an almost literary feel, when compared to the chests of gold and cartoon pirates of many other slots with maritime themes.

The icons are displayed as full-colour scenes on the three windows on each reel, and The Explorers offers 15 fixed pay lines. Players can bet between 1 and 20 coins per line, in five stages. Like some other EGT games, The Explorers is also linked into the Jackpot Cards network, a progressive jackpot bonus that can be triggered at random after any paid spin.

Above the reels on The Explorers, players will see the four card suits ranked in ascending order of value: clubs, diamonds, hearts and spades, along with a display of constantly increasing amounts. When the Jackpot Cards feature is randomly activated, a new screen of 12 face-down cards appears. The player picks cards to reveal, until they have uncovered three matches of the same suit. They then win the progressive jackpot linked to that suit at the moment the player revealed the final card.

Symbols Based on Exotic Wanderings

Although The Explorers’ reels use four poker symbols, J, Q, K and A like various real money casino games, even they have been given a thorough revamp by the EGT design team. They employ an odd font that looks like Gothic script with oriental flounces, in rich glowing colours enhanced with relief designs. J’s and Q’s win the same prizes for identical matches, as do Ks and As. Low-value prizes range from 5 coins for three J’s or Q’s, to 150 coins for five A’s or K’s.

Two medium-value icons; a sextant and a logbook with compass and telescope, also pay equal-value prizes; 10, 50 or 200 coins for three, four or five of a kind. The three human characters; an explorer with a mysterious potion, a beautiful woman, and a bearded sea captain, also begin paying prizes for three matches or better. For five matches, they pay 250, 500 or 750 coins, respectively. Each game icon has its own music to celebrate wins, along with eye-catching animations. 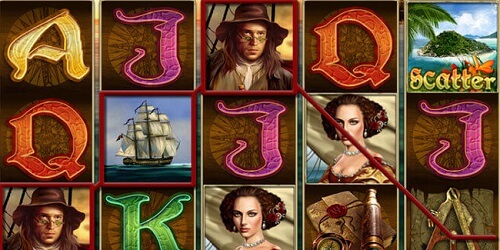 The Explorers uses a ship under full sail as its Wild, with a close-up of a cannon shot whenever it features in a win. Apart from being able to match any other symbol except the Scatter, and double any win it appears in, the Wild also wins prizes for matches of two or more with itself. The prizes for these Wild matches are not doubled, but they are substantial to begin with: 10, 100, 1,000 or 5,000 coins for two, three, four or five of a kind. 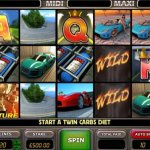 A Quick Introduction to Super Cars Slot from OpenBet